NOTE: This custom-designed bar has been a prototype for other home bars done in different wood treatments as specified by the owner. Primo Craft then builds and installs these outstanding custom bars around the U.S.

The manor and farm’s third owners were young and naïve back in 1977 when they bought the old manor. The place had run down considerably during the 60’s and needed an unbelievable amount of work according to Mike Kasun, the present owner. In the years since, there has been constant work done on the house and barn, but still maintaining the old world character

That was 38 years ago and the house is still not finished yet but getting close. Most of house has been gutted and rebuilt to meet modern building codes. The house is full of many different unique, but not matching, solid wood doors with unusual hardware. The entire foundation is limestone with framed construction and stucco exterior in the old English Tudor style.

This picture is worth a thousand words…Adding Character…Adding Family Space
The basement contains one of the most unique rooms in the house. The walls are two-foot thick limestone with five stained glass windows facing the heavily wooded river valley. Mike Kasun had always envisioned this room to be a “pub bar” but time and money kept the project low on the priority list until last year. After searching on the internet for over a year and visiting architectural antiques shops for years, Mike finally decided he would have to design the bar. He studied over 1,000 pub bars and picked about ten that included the features he wanted.

The problem was, who was going to be able to build this bar? It had to be made from dark cherrywood and incorporate ornate carvings of crests and lions. Fluted columns and corbels were essential as well as glass shelves to hold the bottles and display the stone walls behind the bar. He found a spectacular stained glass window that had come from England and contained two facing lions with a pheasant shield. This had to be incorporated into the back bar and backlighted because the old glass was so dark. It was going to take an artist and craftsman to help design and build this bar and environment.

That’s when Mike found Dave Challman on the web. They set to work to design the bar and cabinets to look like an old English pub from images Mike had made from web sites. Together, they designed the carvings and curves, the columns and corbels. The room contained an irregular shaped stone fireplace that presented an unusual challenge for the side cabinets. But after a year, Mike finished the cherrywood shiplap ceiling complete with new lighting of the stone walls with LED strips hidden behind a cherrywood ceiling board. FYI,
shiplap is a style of wooden wall siding characterized by long planks, normally painted white, that are mounted horizontally with a slight gap between them, which is commonly used in exterior construction.

Dave built the bar and cabinets offsite and then installed the bar and cabinets and the large stained glass piece from England. The bar is a dark cherrywood color with brass foot rail and brass beer tap tower with two taps. The beer lines run three feet through the stone wall into the kegerator and bathroom space next door. It has a resin bar top to protect it from moisture.

All the backstory is most interesting, but what is important is the tremendous amount of fun and family time everyone has around this bar area at the Kasun home. Mike proudly tells everyone, “This is MY bar—and I helped design it!”

Check out our other examples! 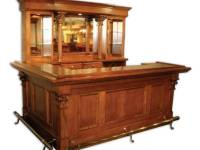