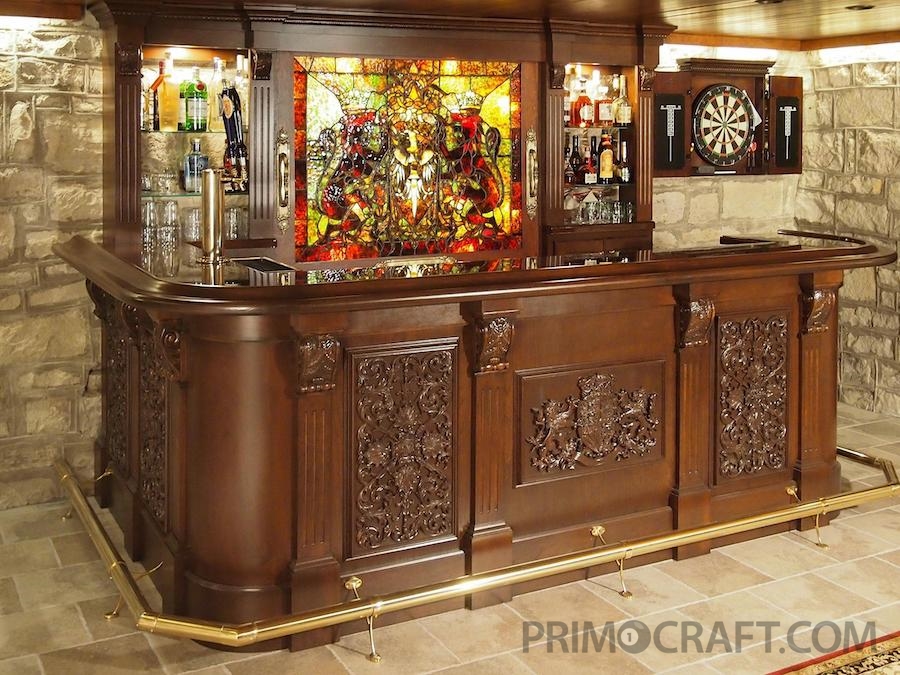 Tucked on the bluff-line of the St. Croix River several miles north of Stillwater sits the old St. Croix Manor previously, but erroneously, named the St. Croix Chateau. Originally, the farm house and barn were built in 1902 and situated on approximately 100 acres of land bordered on the East and North by the St. Croix River bluff. In the early twenties, about 1925, Doctor Harvey purchased the property from the farm family and began an unusual renovation project which must have lasted for years. Dr. Harvey, the story goes, was a professor living at a place called the Three Tuns Inn in Cambridge, England. Prior to settling in Minnesota, Dr. Harvey took the plans of the Three Tuns Inn and rebuilt the old farm house to resemble the old Cambridge Inn. Rumor has it he purchased stone from the old Stillwater territorial prison, where some of the Jesse James gang were incarcerated at one time, and used the white and yellow limestone to shape the structure to resemble the old English Inn. Thus the reason for the recent name change to “Manor” versus “Chateau.” It was Doctor Gaffney, who purchased the estate from Dr. Harvey in the late forties or early fifties, who first named the property the St. Croix Chateau. He liked the name because it rhymed with St. Croix but the estate was of English design not French. So the name should have been “Manor” from the beginning.

The Harvey’s were very interesting people creating an experimental apple orchard out of the land around the house and barn. They formed the first garden club in Minnesota and built a hand-dug stone swimming pool on the grounds. The pool exists today and, while renovated to meet code and weather conditions, it is most likely the oldest working concrete and stone pool in Minnesota built in the mid 1920’s.  The present owner purchased the property from Dr. Gaffney in 1977 and has been restoring it ever since. The place had run down considerably during the 60’s and needed an unbelievable amount of work according to Mike Kasun, the present owner.

The Kasun’s were young and naïve back in 1977 when they bought the old manor, according to Mike. Mike and his wife Lea thought they could easily rehab the old house and barn while maintaining full time jobs and raising three little children, a dog, and a cat. That was thirty-eight years ago and the house is still not finished yet but getting close. Most of house has been gutted and rebuilt to meet modern building codes but still maintaining the old world character Dr. Harvey envisioned for the Inn. The house has a number of signature rooms including a stone arch entry that has been surrounded by a new stone structure to keep in line with the old English Inn style. The Harvey’s collected rocks and unique wood doors on their many traveling adventures.  The house is full of many different unique, but not matching, solid wood doors with unusual hardware. The entire foundation is limestone with framed construction and stucco exterior in the old English Tudor style.

The basement contains one of the most unique rooms in the house. The walls are two-foot thick limestone with five stained glass windows facing the heavily wooded river valley. Mike Kasun had always envisioned this room to be a Pub Bar but time and money kept the project low on the priority list until last year. After searching on the internet for over a year and visiting architectural antiques shops for years, Mike finally decided he would have to design and build the bar. He studied over 1,000 pub bars and picked about ten that included the features he wanted. The problem was, who was going to be able to build this bar?  It had to be made from dark cherry wood and incorporate ornate carvings of crests and lions. Fluted columns and corbels were essential as well as glass shelves to hold the bottles and display the stone walls behind the bar. He found a large stained glass window which came from England and contained two facing lions with a pheasant shield. This had to be incorporated into the back bar and back- lighted because the old glass was so dark. It was going to take an artist and craftsman to help design and build this bar and environment. Mike found Dave Challman on the web.  Mike calls him Dave, the bar builder, because that’s primarily what he does except for pool tables. But Dave’s talent is really bars. Dave was destined to build this bar as fate and time brought Mike and Dave together after thirty-eight years.

Dave had moved to California with his parents in the 60’s and as a young man started his career designing and building pool tables. He was exceptional at it in California but decided he would move back to Minnesota in the summer of 1977 because he thought the market there would be better. He came to Stillwater, Minnesota, looking for work to tie him over until he could get his pool table shop and business going. He took a job with a young German man who just started his roofing company in Stillwater. Dave’s first job back in Minnesota was to help roof the Kasun barn.  The boys roofed the 50 foot structure using just ladders and ropes. The main beams inside the barn were rotten and had to be repaired and in some cases replaced. It was an extremely difficult and dangerous job but fortunately it went well and Dave moved on to his pool table business and the Kasun’s started their long renovation of the property. Dave and Mike did not meet again until 2013 when Mike found Dave on the internet.

At first, Dave did not recall that he had roofed the barn thirty seven years ago. But once he saw the place it all came back to him and both men knew this was destiny. They set to work to design the bar and cabinets to look like an old English pub from images Mike had made from web sites. Together, they designed the carvings and curves, the columns and corbels. The room contained an irregular shaped stone fireplace which presented an unusual challenge for the side cabinets. But after a year, Mike finished the cherrywood ship-lap ceiling complete with new lighting of the stone walls with LED strips hidden behind a cherrywood ceiling board. Dave built the bar and cabinets offsite and installed the bar and cabinets and the large stained glass piece from England. The bar is a dark Cherrywood color with brass foot rail and brass tap tower with two taps. The beer lines run three feet through the stone wall into the kegerator and bathroom space next door. The Bar room looks like it came out of the old Three Tuns Inn in Cambridge, England. Dr. Harvey would have been proud. And so another chapter of the St. Croix Manor renovation is complete. More to come.

Check out our other examples!

Primo Craft offers many standard home bars, basement bars and wet bars in a variety of configurations, and we also design custom bars for clients nationwide.  But we don't stop there!  We custom design beautiful wood furnishings, including entertainment centers, TV cabinets, fireplaces mantels, fireplace surrounds, shelving and more to make the most of your casual living spaces. 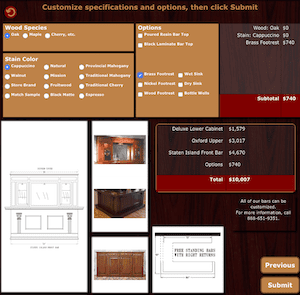